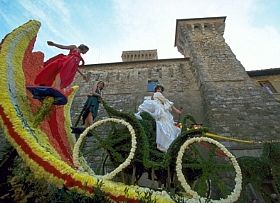 Lucignano boasts a remarkable folkloric tradition, in some way linked to its status as a farming village. And the close connection between the hard farm work, with its times marked by the seasons, and rites of a rural civilization, whose signs are still visible in the rolling lines of a sober landscape or the gestures and jargon of people here, it acts like more than an ideal glue.

The first major event in Lucignano is the famous Maggiolata, which takes place during the last 2 Sundays of May. It is a feast clearly linked to the best Tuscan rural tradition, a sort of revival of the ancient summery celebrations after the long winter, almost a ritual propitiation for abundant harvests.

Today, like many years ago, the festival has very specific connotations, recalling ancient celebratory aspects: the parade of floats, supplementing flowers, the participation of music bands and folk groups from all over Italy and from abroad, running through the entire ring of narrow alleys downtown; the historical parade that precedes and announces the start of the feast; the same medieval division of municipal districts, joyfully contending the prize for the realization of the most beautiful cart. You will notice the presence of so many flowers, not only over the carts of various districts, but also on the streets, balconies and doors, in a colour game of great effect.

Haven't visited yet? Have questions about Maggiolata Lucignanese? Ask them here!

Rent a holiday house in Lucignano and travel like a local.