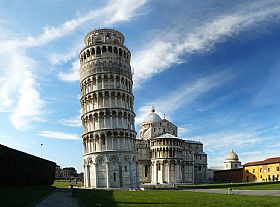 A fancy freestanding bell tower that leans precariously towards the ground is one of Italy's most famous tourist attractions. Known the world over, the Romanesque structure was designed to impress - and that it has done, though not for the reasons the architect intended. Started in 1174, the tower was built on a shallow foundation on sandy-clay soil. It already started to lean before the third level was completed. Adjustments were made to try to compensate but it was deemed irreparable.

Construction was stopped for a century because the Republic of Pisa was embroiled in battles for supremacy among other maritime powers. It was taken up again and finally completed in 1350, with the foundation continuing to settle and cause the tower to tilt and became notorious. Galileo climbed to the top to conduct his famous experiments on the velocity of falling objects from the leaning side of the tower looking down easily upon the field below.

The decorative design of columns and arches make it one of the loveliest towers in Italy. Carved reliefs of Pisa's naval power are engraved at its entrance, and a spiral staircase curls within it to reach the top. Located in the Campo dei Miracoli (Field of Miracles), it's almost miraculous that the tower hasn't tumbled. It was built to accompany the matching marble Romanesque cathedral dedicated to Santa Maria Assunta and the bulbous-domed baptistry, which has amazing acoustics and is often host to spiritual music and acapella chants. Together, the structures form a monumental complex that is well worth a visit.

Recent interventions have decreased the lean and shored it up, making the Leaning Tower safe for visitors to climb to the top and enjoy the view. Reservations are required, though, as only 10 people are allowed to enter at a time. Reservations can be made through the non-profit organization Opa Pisa or at the ticket agency TickItaly.

Haven't visited yet? Have questions about Leaning Tower of Pisa? Ask them here!