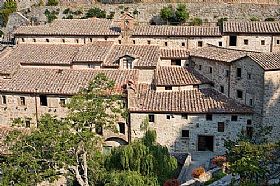 When Saint Francis and his followers came to Cortona in 1211, they restored a couple of peasant cottages and chapel as a place of retreat. The stone rooms were called "cells" which is then what the entire structure became known as. Situated at the base of Mount Sant'Egidio, it was -and still is- a tranquil spot among the woods.

The friars' cells were built of stone and each room was only large enough for a bed, a writing desk and chair, as prescribed by St. Francis as the essentials necessary for contemplation. After Francis died, Brother Elias came to live here permanently, expanding the complex into a full-fledged Franciscan monastery. It fell into disuse for a period, then in 1537 passed to the order's Capucin offshoot, and the property is still a Franciscan order monastery. Seven friars live here and maintain this historic site, which remains a place of prayer and contemplation.

Come and wander through the woods, tour the complex and enjoy some tranquility just as countless pilgrims have done for centuries.

Haven't visited yet? Have questions about Hermitage Le Celle? Ask them here!

Rent a holiday house in Cortona and travel like a local.