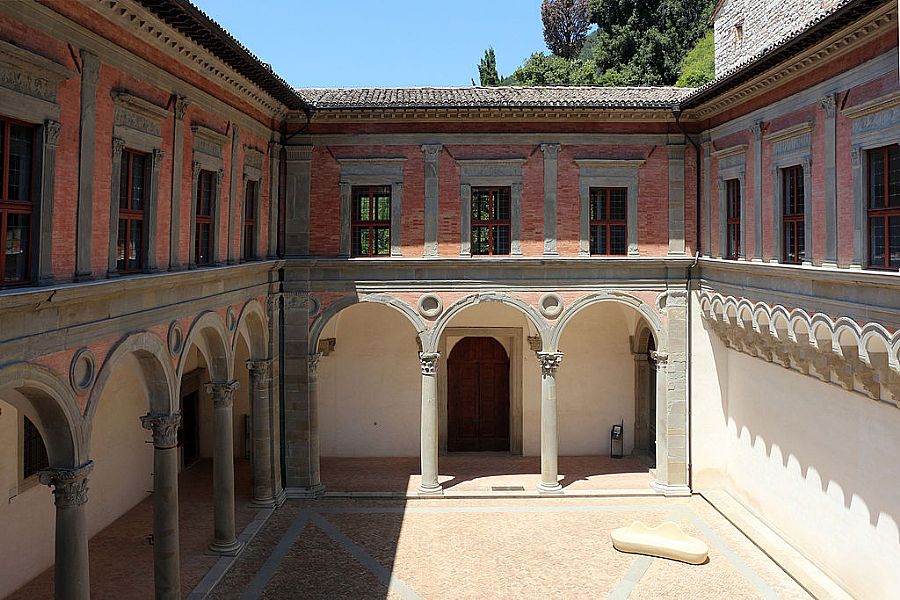 At the height of old town Gubbio next to the Cathedral is the distinctive Ducal Palace built by the Dukes of Urbino. The structure combines medieval architecture with Renaissance adornments, in fact, the only Renaissance style in the predominantly medieval city. The style is most noted in the decorative elements, such as the capitals, the portico and refinement of the internal courtyard, and the massive fireplaces. The salons and corridors echo some of the Renaissance, as well.

Built in 1470 for the Montefeltro dukes who ruled from the Duchy of Urbino, the structure was a regal summer estate for themselves, their families, and the court. The building is sometimes referred as Corte Nuova (New Court). It bears distinctive crenellations on the roofline. There are two wings around a central courtyard.

While most of the original furnishings were moved or sold off, a few remain. The building is interesting to see for its style and for the art and revolving exhibits it hosts. There are also impressive Roman excavations below. Special events and exhibitions are hosted regularly.

HOURS: 8:30 AM til 7:30 PM from spring through autumn. By appointment in low season. Closed Mondays.

Haven't visited yet? Have questions about Gubbio Ducale Palace? Ask them here!

Have a look at our vacation villas in Gubbio.