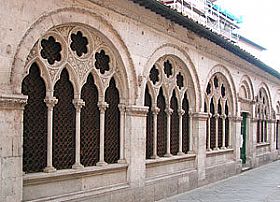 Santa Maria della Rosa is a rare example of Gothic style in the splendid city of Lucca. Built in the early fourteenth century, it was originally a chapel of veneration of the image of the Virgin Mary called "delle rose", for the flowers that she held in her hands. Such a dedicated following frequented the chapel that it was embellished with beautiful arches along the side facade. Note the portal decorated with unusual roses - coming out from the mouth of a dragon! Find the statue of the Madonna with child, holding roses in her hands, at the corner of the structure.

The redecorating work in 1333 shifted the focus to the side wall, while preserving original Gothic style, one of the few found in Lucca. The church interior was redone in the fifteenth-century, with three aisles, pillars and cross vaults. On the main altar is the fourteenth-century Madonna delle Rose, considered among the most prestigious paintings of Lucca, still adored by the townspeople today.

The church of Santat Maria della Rosa was frequented St Gemma Galgani in the early 1900s, who died at 25 because of tuberculosis. She is remembered every year in the the church on April 11, the anniversary of her death. St. Gemma's prayer bench is preserved and used for prayer by faithful followers.

Haven't visited yet? Have questions about Church of St Maria della Rosa? Ask them here!