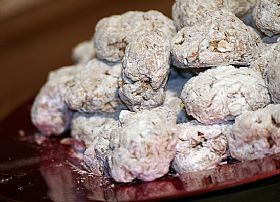 The Cavallucci are traditional white, spongy, aniseed and compact biscuits, with walnuts and candied fruit, produced in the province of Siena.

In 1515, the Concistory decided to give out all the members, in occasion of the numerous bank holidays, panpepato and "berriguocoli" (later called Cavallucci). From then on, these biscuits have been given as gift to friends and relatives during the bank holidays. Common people use them as daily meal soaked in wine.

Roughly mince the walnuts and chop the orange into small pieces. Melt the sugar: use a heavy duty all clad saucepan, 300 grams of sugar on medium heat, and a wooden spoon to stir with. The best way is to just stand over it and stir in non-stop. It will take a while, but you won't have to worry about it burning. As soon as all the sugar is completely melted, remove the pan from the heat. Place the flour onto the pastry board, scoop out a well in the middle and pour all the ingredients there. Start kneading till you have a compact homogeneous dough, adding as much flour as needed. Divide the dough into small pieces to make many oval-shaped cavallucci.

Sprinkle the tops with flour and place them into the baking sheet. Bake into pre-heated oven to 200 degrees C for about 30 minutes.

Haven't visited yet? Have questions about Cavallucci? Ask them here!

Rent a holiday home in Siena and travel like a local.