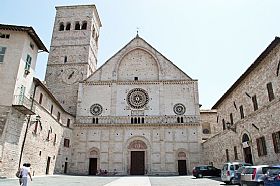 While the church that gets the most attention in Assisi is the Basilica of St Francis, the city's Cathedral is also worth a visit. Many think that the basilica is the cathedral, but the church of San Rufino has that role. In fact, it's history goes back farther and it was here that Francis was baptized, as well as St. Clare, and, tradition dictates, so was Frederick II, the Holy Roman Emperor. The cathedral stands on the site that had formerly held the Roman forum. There were two smaller churches previously dedicated to San Rufino.

San Rufino was built in Umbrian Romanesque style, and when standing in the piazza, the facade obscures the dome. A squared bell tower stands alongside, also built from blocks of travertine. There are three rose windows and beautiful friezes. Take note of the lions and griffins guarding the door, they are the symbols of Perugia, under whose domination the city fell in the 1200s. The lunette depicts Christ enthroned between the sun and moon, which may have inspired Francis's famous canticle of Brother Sun and Sister Moon. Also depicted is the Madonna and baby, and St. Rufinus. There are also lovely floral and geometric carvings around the portal.

Inside you'll find the baptismal font to the right of the entrance, with which St. Francis, St. Clare and Frederick II were baptized. It is said that it was in this church, while hearing St. Francis speak, that Clare realized her calling. In the crypt, decorations from the older church are visible. The Bishop's chair is on display, and this is where you'll find the relics of San Rufino (St. Rufinus), the man who converted Assisi to Christianity and was martyred for it in nearby Costano in the 200s AD.

There is a nice museum with frescoes, triptychs, religious works and some archeological displays, as well.

Haven't visited yet? Have questions about Cathedral San Rufino? Ask them here!

Rent a holiday house in Assisi and travel like a local.