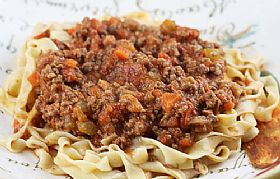 What is now well known in Italian restaurants worldwide, the Bolognese sauce is better known in Tuscany as Sugo di Carne (simply, meat sauce). It's not as thick and tomatoey as many restaurants serve it; rather, you can really taste the meat! It gets its name from the city of Bologna, but is widely served throughout Tuscany and all of central Italy.

Finely chop the carrot, onion, and celery. In Tuscany this is called soffritto, and is used frequently in many sauces. Saute the soffritto in a couple of tablespoons of extra virgin olive oil until tender.

Add the ground meat stir until browned. Add the wine and let it evaporate. Then add the tomatoes. Salt and pepper to taste. Lower the heat and let cook for 45 minutes, stirring occasionally.

If the sauce seems too dry, add some of the water from the pasta you are cooking.

Cook the pasta in salted water until al dente. Drain the pasta, and then put it back in the pan. Add the pasta sauce and stir to let the sauce flavor the pasta. Top with grated parmesan cheese and serve.

Haven't visited yet? Have questions about Bolognese Sauce Tuscany Style? Ask them here!