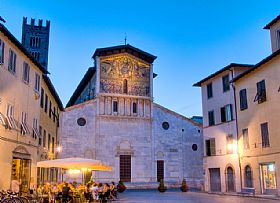 The Basilica of San Frediano isthe oldest church in Lucca, named for a bishop from Ireland who came to Lucca and established the church, originally dedicated to San Vincenzo. It was renamed in honor of the saint, who is buried in the crypt. The original church was built in the 6th century but the present structure was begun in 1112 and dedicated in 1147. There were renovations in the 13th century that added the incredible mosaics on the facade and other decorations. The exterior boasts a rounded apse adorned with bands of white marble, and a tall bell tower.

The medieval interior is dim, but the columns lining the nave are from the Roman amphitheater. The side chapels are decked out in fresco cycles. Don't miss the exquisitely carved baptismal font.

The Basilica is located in the heart of Lucca on the Piazza San Frediano, just a few steps from Piazza Anfiteatro.

Haven't visited yet? Have questions about Basilica of St Frediano? Ask them here!