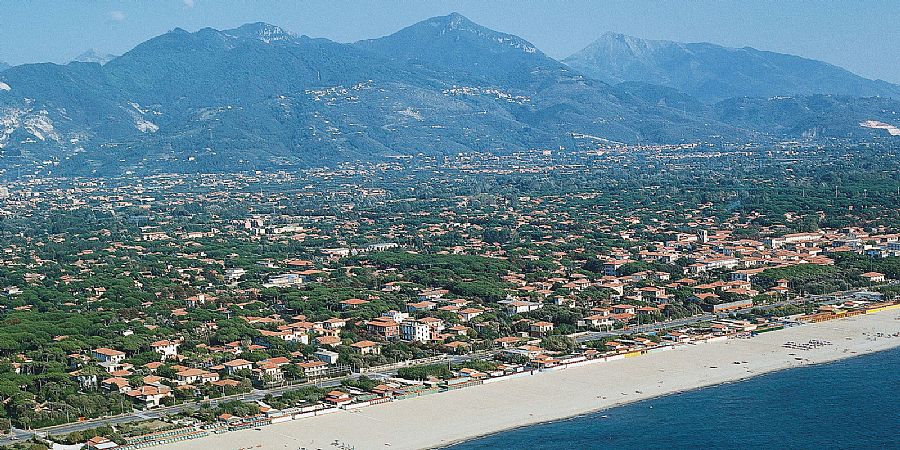 In a resort area that is known for its VIPs and high-priced beach concessionaires, it is nice to find a place that the average traveler can afford. We hunted down the best bargain beach at Forte dei Marmi so you can enjoy the amenities without paying a fortune!

The Comune of Forte dei Marmi has two affordable beaches that the town administers and keeps clean. They have them outfitted with umbrellas and lounge chairs like the others, but at reasonable rates. Most people don't know they exist, and you have to know where to look. There are TWO "SPIAGGIA COMUNALE" - one is along the southeast (and most exclusive!) stretch of coast and the other is at the northwest end of the town's long vast expanse of sand. Both offer not just affordable days in the sun, but they come with free parking, free showers and changing rooms, too!

1) Bagno Comunale Levante - Located between the city's most exclusive and expensive "Bagni" beaches- near Bagno Twiga (where high-spending Milanesi and VIPs spend upwards of €800 for a day at the beach!); it is wedged between well-known Bagno Piero and Bagno America is the low-key but high-value city-run beach. It is at the "levante" (or southeasterly) end of town. Here you'll pay (at time of writing) between €19 in low summer season and €30 in high season (July and August). There is a bar and shaded refreshment area, too. It is at Viale della Repubblica 93; the crosswalk at the cross-street Amerigo Vespucci leads into the entrance (next to Piero) where you'll see the simple sign with the town name and "Spiaggia Attrezzata" written on it. Phone: (+39) 347-8635126

2) Bagno Coumunale Le Dune del Forte. Located at the "ponente" (northwesterly" end) near the WWF coastal dunes park, the city-run beach is called Le Dune del Forte. You'll find 120 umbrellas with chairs for rent, a restaurant, showers, changing rooms and kiddy play area, along with free WiFi. It enjoys a more natural setting thanks to the dunes, and the next-door WWF park, which is left entirely in its natural state (and is free and open). Cost here is also between 20-30 per day between low-high summer season. Another benefit here is that it is handicapped-accessible and offers water-accessible wheelchairs. It is at Viale Italico 154, next to Forte Beach club. Visit their website for more information. Phone: (+39) 339-7815335.