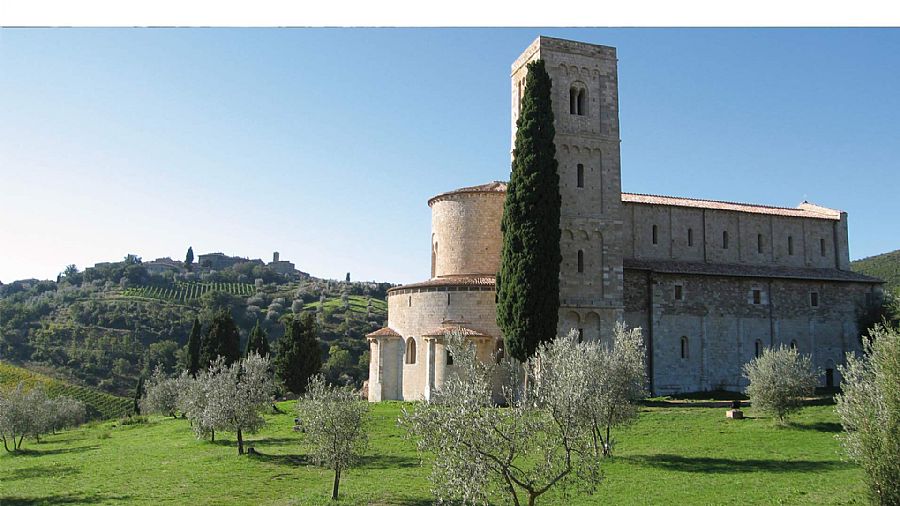 Near Montalcino stands a majestic monastery structure that is considered one of the most beautiful Romanesque churches in Italy. The Benedictine monastery was established as part of the Monte Oliveto Maggiore monastery, and the friars were called Olivetani. They wear white robes in devotion to the Virgin Mary, rather than the usual brown ones. They were dedicated to The Rule of St. Benedict, and devoted themselves to prayer, studies and service. In fact, there is still an Olivetan community residing at the abbey and welcoming guests in Benedictine tradition of giving hospitality to all.

The abbey exults his position and surrounding landscape, set amidst olive groves and vineyards in a beautiful countryside. The church was built with local travertine stone. The portal is carved with floral and animal motifs. The architecture is an elegant example of Romanesque style. There are views of Castelnuovo dell'Abate. Because of the beauty of the setting and harmony with its landscape, it's popular to arrive on foot by way of a trail or the road to really enjoy the breathtaking nature of the place. There is a trail from Castelnuovo dell'Abate that arrives by way of a Scout Camp, and there is a trail from the abbey to Montalcino that is well marked.

The abbey had been closed by Pope Pius II and remained vacant and decaying for centuries, until it was restored and brought back to life in the 1980s. A community of Benedictine brothers maintain the old traditions, including Gregorian chants as a form a prayer. You can hear the ethereal music if you time your visit right (see the website for current schedule).

The Abbey of Sant'Antimo is open from 7:00 AM til 7:00 PM daily. There is a bookstore and information center onsite.

Haven't visited yet? Have questions about Abbey of Sant'Antimo? Ask them here!