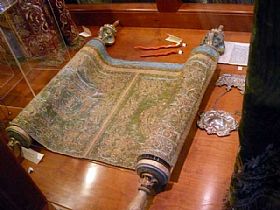 The Jewish History Museum Yeshiva Marina is housed in the 18th century neoclassic Marini Oratorio. It has been the home of the Confraternity Malbish Arumin since 1867, an organization that provides clothing to the city's poor. The building also housed the synagogue in the period immediately following World War II, until a new modern one was built.

The Museum displays sacred scrolls, paintings, furnishings religious objects, and an historic Aron ha-kodesh, the ark where Torah scrolls are kept, that was brought to Livorno by Jews fleeing Portugal. The Museo Ebraico is testimony to Livorno's history; there has been a Jewish community here since the early 1600s when it was declared a haven by Ferdinando II. There is also a Jewish cemetery that is worth a stop. The Jewish community continues undisturbed here. Browse the Central Market where you'll find Kosher food stalls among the mercato vendors.

Haven't visited yet? Have questions about Museo Ebraico? Ask them here!